It's been just over a month now, since I started back at work at ACGC. It seems crazy just how fast time has been moving. My feet don't quite feel like they have parked themselves below me again - yet here I am in this whirlwind faking it. I am sure I will manage to get my feet grounded soon... I hope.

This weekend was the ACGC Annual General Meeting. It was fun to get to reconnect with so many incredible people working in such incredible ways to promote a better, healthier, more just world. ACGC has grown and changed so much in the time I have been working there. We went from 1 1/2 staff folks attempting to carry a workload for 10 in our homes - to 3 full time, 1 part time and a whole handful of different contract and sessional folks - in an office, with work that seems so much more do-able, with more hands contributing.

A few years ago the Council started a tradition of a public event on the first night of the AGM to kick off things, inviting the public and some sort of speaker. We've had Maude Barlow, Steven Lewis and this year we had Wade Davis come and talk to us, giving a presentation titled, "Why ancient wisdom matters in the modern world". It was really interesting - and I have a lot of things that I want to think about.

The evening kicked off with a presentation by Eriel Deranger (the new interim Executive Director of the Sierra Club Prairies). She was speaking to the Alberta Perspective on the same topic, speaking specically about Northern Alberta, the tar sands, and the impacts on community and environment.

In the near future - part of my tasks are creating a pod-cast for the ACGC channel on the gala but in the meantime - here's a hint of some of what struck me:

There was so much to think about... and I think if I start typing it all now - this will become a gigantic post... so I will wait and share more later. 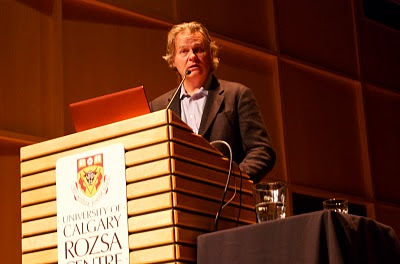 Peace to you,
diana
Posted by this Prairie Girl at 2:28 PM