Over the long weekend - I headed down to dino-land again. While I was there something amazing happened. I was lucky to be there for the Birds of Prey demo put on by the Alberta Birds of Prey Foundation. They had brought out a bunch of birds of prey which were pretty cool to see so close up. Really, how often do you see a giant bird (or a tiny one for that matter) mere feet from you?

If you have extra cash - this seems like a great place to make a donation. They are striving to rehabilitate these awesome creatures so they can return to the wild as well as providing sanctuary for birds who cannot. Pretty amazing. 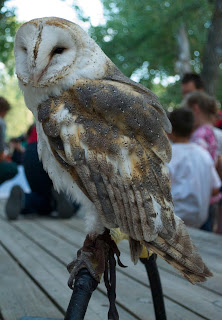 At the zoo one of my favourite birds are the burrowing owls. At the presentation I got touch one - which was pretty cool. They're just so pretty - and SOFT. 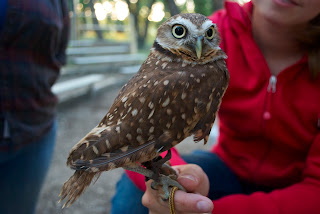 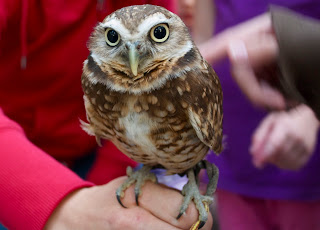 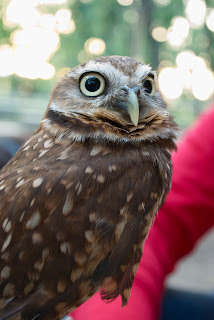 This fella had one of the prettiest faces. I love all that I have been learning about owl's eyes - and his were just so cool, especially with that ring of beautiful feathers surrounding them. She (or he?) is a Short Eared Owl - which is a species that apparently exists on all continents apart from Antarctica and Australia. 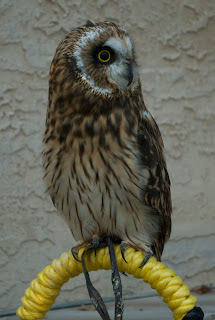 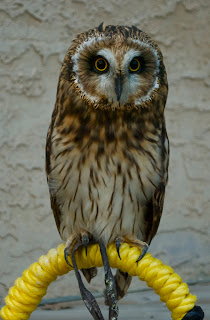 Presently, the Foundation has a great horned owl, owlet. He still has his downy feathers and is this fluffy ball of curiousity. Throughout the time he was there he was memorized by the robins and other birds making a ruckus in the trees. We learned that as owlets they kind of dance their heads in circles, which they apparently outgrow, but it is part of the process of learning to listen and see prey - really fun to watch. His "horns" are just starting to come in. Looking at his face, I found myself thinking of Owl in Winnie The Pooh - who could raise an eyebrow just so effectively. 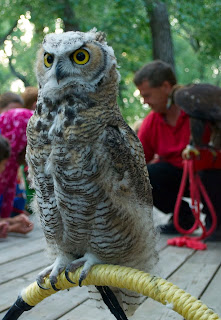 This little dude was the smallest (or at least youngest, he's close to the size of a burrowing owl already) fellow who came. He's quite clearly still a babe, learning presently how to stand up and stretch out his wings. His feathers are starting to come in - which makes him look kind of lumpy. He's a Swainson hawk - which according to the presentation we heard, is often that most common hawk that you see on tops of fence posts as you drive through Alberta. 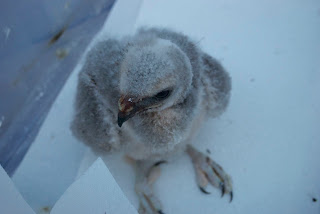 The largest bird that was along was Spirit. Spirit is a Golden Eagle who came to the centre when he was found very injured. Someone had shot him - completely blinding him. Removing the pellets would have likely killed him, so he is a permanent resident at the sanctuary, adapting to living blind.


In the land of completely unexpected, I got to hold (or be a perch) for Spirit. Amazing! Not something I had guessed I would be doing. Pretty darn cool. 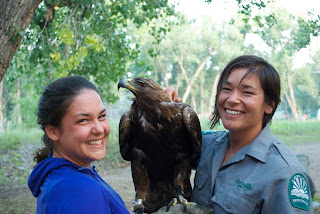 I joke with some of my dearest friends - that adventures with them involve looking down (with one who loves critters) and looking up (with one who loves birds). I find both quite interesting and have learned a lot travelling with them. I think Trish would have had a great time with this presentation.

Next time you're out walking, look up - there are some pretty amazing creatures up there!
Peace to you~

Posted by this Prairie Girl at 8:35 PM