It's amazing how fast 5 weeks can go. In many ways it seems like we were just packing to head to Quebec and now - we're enroute home. Craziness. The program ended well. As my brain kind of packed it in a bit early... there was a bit more time for adventuring. That's at last how I'm justifying it.

My class did some fun things as we were wrapping up the program. One of my favourites was the battle with Carly's class... Someone in her class had been smack talking mine - and the teachers decided we should have a battle for the title of "meilleure classe". It was hilarious - I don't know if a winner was chosen, but I had fun.

The program also ends with a "spectacle". It's mostly presentations by the different workshops - dance, song... but the animateurs had created an embedded skit, which was pretty fun.


One of the things we squished in before we left was a visit to the Musée de la Civilisation which is an awesome museum. It's huge! I really should have started my visits at the beginning of the trip to actually make it to all the exhibits. There were lots which are fun - like Observe. More than meets the eye which is all about seeing/experiencing things differently or Like cats and dogs which is about how dogs and cats experience the world - where you can see the way dogs see, or test your capabilities compared to that of an animal (for example - if I were a cat, instead of me - for my height I should be able to jump close to 10 meters from standing! How crazy is that?). There was an exhibit on the history of Quebec - representing many different perspectives of the many diverse populations who live and have lived there (by far the most inclusive thing I saw during my time in Quebec about First Nations populations). Something that is really awesome about this museum is how all the exhibits are interactive. There are videos, games, activities, things to listen to... in all the exhibits, not just those geared towards a younger audience (although, those did have more of those elements). I think that's part of the reason it always seems busy.

My favourite part of the museum was the exhibit entitled Uprising X 25 which was inspiring! The exhibit looks at around 20 different uprisings, protests, or movements that have occurred in the last 25 years, since the Berlin Wall came down. It blended music and spoken word with text and videos. In some ways - it was amazing to see the ways in which people have come together over and issue and influenced changes in policy or action. In others it was a bit discouraging to see such a profile of the challenges faced in communities around the world - and how so many seem to have the same root. For the uprisings that I was more familiar with, it felt a bit like there were left out parts of the stories - the reactions or policies, or in some cases - the horrific responses of those in power. I did appreciate how the focus was on connectedness and peaceful protest. The only part I was truly disappointed by was how women were under-represented in the exhibit. Overall - it was amazing. As I wandered around - I found myself inspired and lesson planning. Thinking about things I would do with my kids this year - tied to language arts and active citizenship. Makes me excited for the upcoming year. I also really liked how there was a call to interact with the content. There is an opportunity to write your dreams, your ideals, your suggestions that will be blended together with others at the conclusion of the exhibit. Check out what's already there: https://legendemondefutur.mcq.org/ Again - scheming plans with my kid-crew this year. 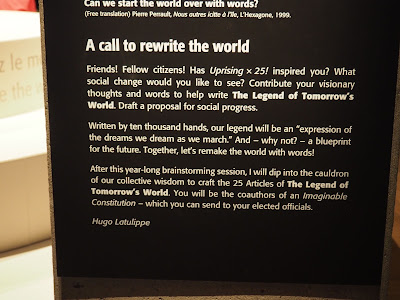 On our way 'home' we stopped at the "Cat Cafe" which is a bit of an odd experience. I think I counted 7  cats - I don't know if that is all of them or not - but the walls are lined with pathways for them - and there are pillows all over. They wander around and if they choose to approach you - you may pet them.

Following the conclusion of the program, Carly and I took the train to Ottawa where we've been for the weekend hanging out with some friends. I like trains. I wish that they were more affordable in the West. Such an awesome way to travel.

So that's it. We head back home this evening. It's been a bit of whirlwind experience - but good. I'll be glad to be home. I hope wherever you are - all is well with you.

Peace to you~
Posted by this Prairie Girl at 3:00 PM