The last few weeks have been, emotionally, very heavy. Coming back to school, after the winter/summer/semester (we didn't really ever figure out what to call it) break, was kind of like not having the break at all. Diving right back in and finding myself still over my head. Holidays are great, but they mean you have to rebuild all your routines afterwards, which can be challenging.

I took two classes in the last three weeks, as part of the January institute, the only point in the year where I choose my courses - like electives. The first course I took was called BePeace - which is a methodology for non-violent communication. My second course was Film and related arts in Peace Education. Both courses raised a mountain of questions for me, most of which tied to strong feelings. Less in my head than most of the classes of last term. :)

The film course, not surprisingly, was filled with films. We watched at least one a day, for the two weeks of the course. I think film is such a powerful medium for telling stories: you hear them - but aren't left simply with your imagination, there are sounds and sights, music and other effects that all grab at your emotions and thoughts in different ways. I am not the best movie watcher, or I am a director's dream - depending on how you look at it. I have a very hard time creating distance between what I am seeing and my life, they become so real. I jump when something startles me, I laugh out loud, I hide when I am scared, and I cry. The difference this time, was I was in class... 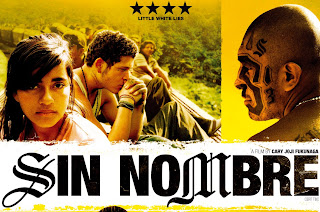 One of the films we watched was called Sin Nombre (Without Name), which had strong ties to one of the books we were reading for the class, Enrique's Journey. Both the film and the book are looking at the flow of migrants from Central America to the United States, especially the danger of travelling through Mexico. In both reading the book and watching the film, I was thinking about friends and acquaintances throughout Central America who have headed North. Thinking of my friends and their families, who have had loved ones just disappear - they don't know if something happened to them, or if they arrived and stop communicating, they're just gone. There is a lot of heart-ache in these stories, and questions about what motivates the migration. Some people argue that is for the money, which to an extent I think is true, but I think there is a dream or a myth in the idea of America that also calls people - that mixed with the pride of not wanting to let the people at home know that things are anything but wonderful. The journey between home and the US/Mexican border is filled with challenges, fears and danger. Those travelling are hunted at all stops, by border police and by self appointed border patrols. Many Central Americans travelling through Mexico do so on the tops of trains, which is dangerous even without all the other risks.

One of my constant struggles, is trying to figure out how to be the person I believe I should be, the person I want to be. How do I consistently make the choices that remember the impacts on others, living - as much as possible, in justice and solidarity. Some days it feels so overwhelming, that it would be so much easier if I just let it go. To just play blind to some of the issues in the world and let the rest be addressed by someone else. Then, out of the blue, something will remind me about the importance of little acts, the reminders of why each persons actions are important and worth it. Of remembering the basis for my belief in hope. A friend send this link of a short spanish film (http://www.elpais.com/videos/cultura/Bigas/Luna/retrata/nueva/musa/Elsa/Pataky/elpvidcul) about Las Patronas. It's a short from Mexico about a group of 14 women the community of La Patrona, Veracruz who each day prepare food for the people travelling aboard the trains. The films cites the estimate that over 400, 000 Central Americans make the journey North each year, largely on the trains, travelling distances of over 8000 kms. Each day, Las Patronas make and deliver approximately 200 rations of food and water to the unknown people travelling on the trains. One of the women in the film, when asked why she does it, talks about how they are humans with rights, even if they don't have papers, how just because they are travelling doesn't mean they shouldn't be treated with kindness. "How if someone says they need help, what I know is that I am here to serve."

There is so much I am still thinking about, in relation to all these films, but that's perhaps enough for today. I send you my gratitude - for the pockets of hope you unknowing send, for the small actions you take - which may often seem unnoticed, and for your kindness in questions.

Peace to you,
diana
Posted by this Prairie Girl at 6:29 PM