On the shoulders of...

This past week I attended the Visiting Lectureship in Human Rights put on by the University of Alberta. If you haven't ever been out to one of their lectures, the folks coordinating do a wonderful job of getting great speakers. When I looked up the who has been a speaker list - I realized that I was present for the first one they did - and I fully intend to keep going whenever I can.

The speaker this year was Lesléa Newman, author, poet, and incredible speaker. If you get a chance to hear her speak you should. She's a prolific writer who seems to have a gift at engaging with controversy, which she does so with grace and humour. 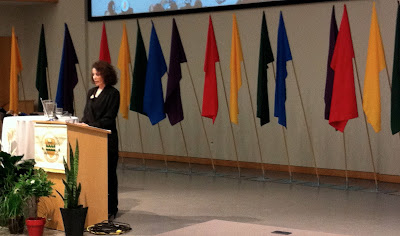 Her book, Heather Has Two Mommies, published in 1990 was the first children's book to positively portray a family with lesbian parents. The story in the book is largely about how the important part of families - is that they're made of people who love each other. To me, not a radical idea, but apparently it inspired many to raise quite a fuss. Although this book is out of print, it is apparently going to be re-released soon, with new illustrations, which is pretty exciting. 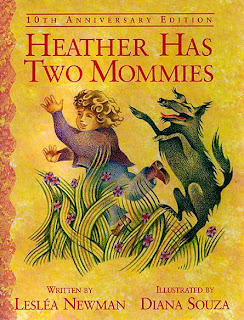 The presentation was a blend of readings of Ms. Newman's work, and her storytelling. She began, talking about all that is built upon the shoulders of those who come before us. The activists who have lost their lives, other authors, our families... One of the excepts she shared is from her book, October Mourning: A Song for Matthew Shepard, which I have only read excerpts of - and listened to different ones. The poems in this book are heart breaking. The poem series speaks the perspectives on different observers (animate and inanimate) of the events that lead to the death of Matthew Shepard. I spent a good portion of her talk in tears - as I think many others did. During her talk she spoke to us about being a part of a community, she spoke of her community - the Jewish, Lesbian community, and our broader community.

Thinking about our communities -the ones that overlap and the ones that don't - and she offered a challenge. But first - a journey. She ask that we close our eyes and visualize a space that safe. Completely safe, where you don't need to worry about anything (have you done it?). Then she asked us to think of something that we don't feel safe doing now - like places you might go, or things you might do, that just don't feel safe. So perhaps walking hand in hand with the person you love, or walking alone ... (again - have you done it?). Then - take that thing that doesn't feel safe, and imagine it in your initial safe place - where there isn't any reason for worry. Pretty great, huh? And then came the challenge.

She asked, that each of us think of a concrete thing that we can do, within the next week, to make the world and our community a little bit more like that safe place. To improve the world. Tikkun Olam in Hebrew, repairing the world. Then, to hold ourselves a little more accountable, turn to your neighbour and share what this promise will be. I found this hard, figuring out what my concrete, achievable goal is. I decided that the most concrete thing I could think of right now - is an ongoing continuation of a battle with a phrase that makes me crazy.

That phrase that makes me CRAZY is "That's so gay!". It's a pervasive phrase that I feel like I have been fighting about for a long time. I remember beginning my undergrad (a little ways back now...) and daily having a conversation that went something like this, (random person who lived on my floor in res or was in a class or in the cafeteria) "Oh my God, that's so gay" (me) "I'm sorry, I am confused, to you mean happy or homosexual?" (random person) "uhhhh, no..." Other times I would just get mad. Slowly they dropped the phrase, at least while I was around, I don't know if it lasted.

Yet here I am, again in school with undergrads, more than 10 years later, and the same phrase is still hatefully floating around. To be made worse, the people in my classes now, are hoping to become teachers... Blarg!

Have you seen this poster? 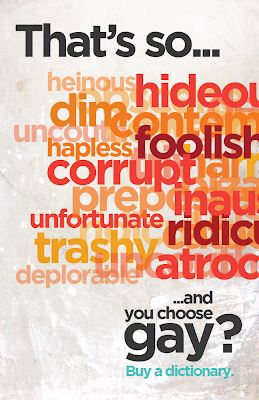 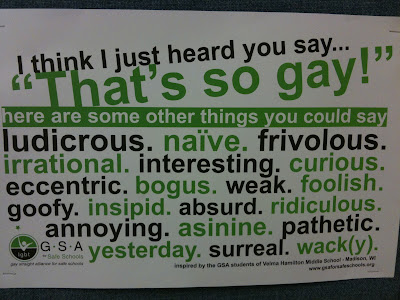 I am glad that there are more initiatives happening that are seeking to help people become aware of their words and the impacts of those words. In the meantime, my most concrete action is to give people hell in a variety of ways when they toss around words like they weigh nothing and don't cause harm. I am trying to remember that we all are learning, different things, at different times, and to also be gentle with my words...

Little by little - I hope that change is coming.

in the meantime - peace to you~

Posted by this Prairie Girl at 1:09 PM