Graduation to road construction- what's next?

I “graduated” this week. I put it in quotations, as I haven’t completed, much less submitted my thesis, so my ‘graduation’ seems a bit false. I mean – we were even presented, with all sorts of pomp and grandeur a piece of rolled up cream card stock with a blue ribbon around it – that didn’t have a single word on it. The smart-ass in me wonders about what that signifies, graduation that comes with a blank sheet… There has to be some sort of profound symbolism in that. hee hee :) 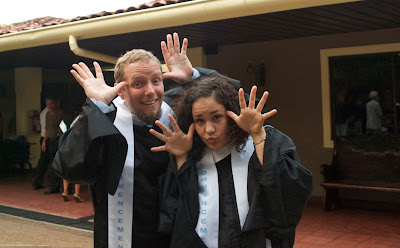 William and me with our graduation "moose" look
“Graduation” was however, a lot of fun. Many of the students are now leaving: going to do internships, or research in other places, or are returning to ‘home’ to do their writing. So, it was great to have a chance to celebrate with many incredible people. Each program created a speech (they were supposed to be 2 minutes) as part of the ceremony. As Peace Ed students, we have been teased all year, about the ‘frivolity’ of our learning, teased that all we do is sing or dance or colour pictures… so we decided to use our speech to tell a different version – and do it via video, so many of our classmates could participate. This is our speech if you want to watch it. 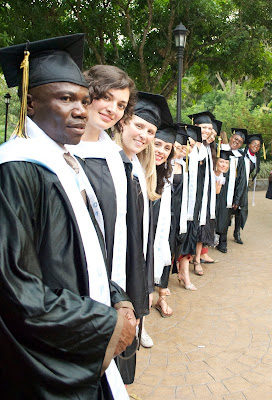 Most of the Peace Education class, cued up to convocate! 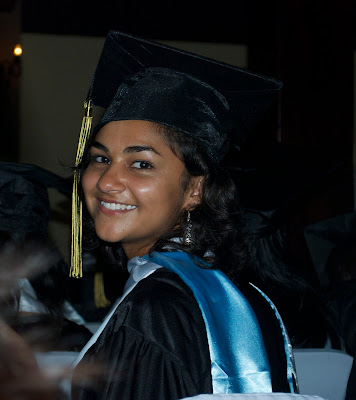 The fantastic Ms. Revati!
It is interesting being far away for these kinds of celebrations. There are so many different ways to celebrate and mark transitions. The cap and gown, for example, which seem to be the dominant dress at the graduations I have been a part of, were completely new to many people. My mom surprised me with the most beautiful bouquet. We were all gathering around for pictures, dressed up in our costumes and one of the people from the administration said, ‘Diana, you need to come with me’… so off I went – and was presented with this giant bundle of the most beautiful flowers. Those who know me, can guess what comes next – yep, I burst into tears, causing a small panic amongst the staff, but they were just surprise tears – and coming from a place of joy. I got so many kind wishes that day, and I felt totally surrounded in love – the flowers were simply icing. 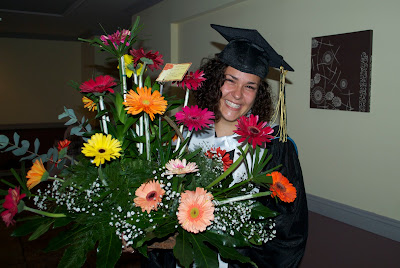 Aren't they pretty??
Following grad there was a meal and in UPeace style a dance. We ditched our caps and gowns and came out in our finery. With this comes another one of my UPeace firsts though. I was part of a flash mob!!! If you haven’t heard of a flash mob before – they’re pretty fun. It’s a pre-planned and choreographed dance that happens when no one else is expecting it. It usually begins with one person dancing – and then others run to join in, and then more folks, until you have a large group of people dancing, and then the song ends – and they all go back to what they were doing… SO MUCH FUN! Someone recorded us – so have a look, if you like. It's kind of like where's waldo... but I am in there. Honest! http://www.youtube.com/watch?v=0ejMwKSIwQ8
We ate and danced and generally had a blast. There was laughter and tears and promises of visits and letters... 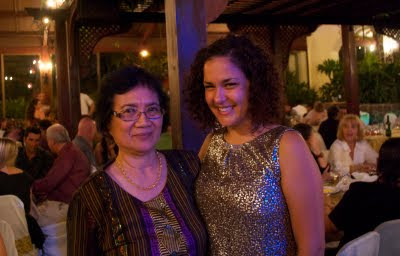 With Virginia, part of the heart of peace education -
and inspiration to continue onward (and finish our projects!!!) 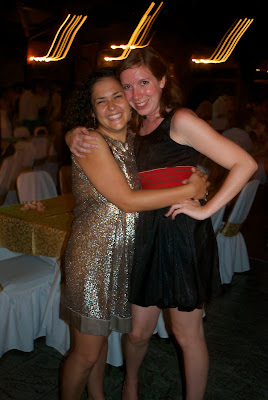 Marvelous Maeve!
(it was a night of hugging - most pictures have people all cuddled up!) 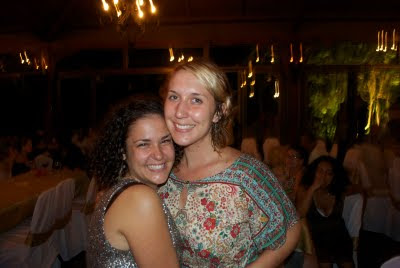 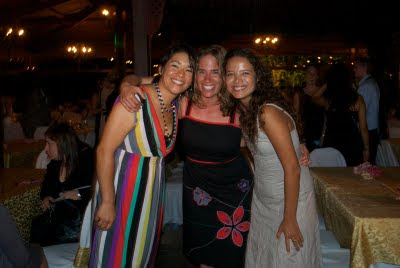 Carly, Sara and Paola!
The following morning, after very little sleep, Carly, Mayuri (and her brother Malay), Sabrina, Dani, Lauren and I headed off to the beach for a couple days. We went to the West Coast, in Santa Teresa, which was beautiful. I have days when I think, ‘I could live near the ocean!’ I love the sound of waves crashing up against the shore, and still have a lot of awe at the rhythm and power of such a large piece of creation. Generally, this prairie girl loves the big open skies and rolling earth; waving with ‘home’, but moments, like in the morning, being right near the water and listening to the ocean greet the earth, while still in bed make me wonder…

We had a great adventure. Two of our travellers had connections which landed us into breathtaking places to stay, still within a student budget (which almost feels like a miracle in itself). I am a bit of a wimp, perhaps just excessively cautious (they are similar - at times), but a lot of what I adore about the ocean, when I am on the shore, scares me when I am in it. I love splashing around, but having my feet be able to touch down feels important, especially in areas with (this is one of my new terms from this holiday) there is a ‘beach break’ and the waves feel all chaotic and aggressive, fighting between pulling me in or spitting me out.

Anyway - to the adventure part of this story. We were travelling in a small car. This is a key point in this story. For those who have done some adventuring in Costa Rica, small cars - not a good idea. ESPECIALLY if you are leaving the central valley - as we did. Happily we headed off, blissfully excited to make it to our second house (which is practically a castle, but that part of the story is still to come). We turned off the main road, as directed - and the road should have been a clue - it practically screamed, "this is likely a bad idea.." but we tried it anyway - and got stuck. I have a fairly constant soundtrack running through my head - and as this adventure continued, Corb Lund's Truck Got Stuck totally was on a loopin my head. We had people trying to dig out some of the surrounding rocks, others trying to prop up the car, some seeking planks.... for the silly little Yaris that didn't belong on the road in the first place. Carly and I hiked up the hill and found a charming fellow with a Dodge - and we eventually got tugged out... but then - what do you do? It is clear the car couldn't go up the hill and going back down looked treacherous... the solution? Road construction!! 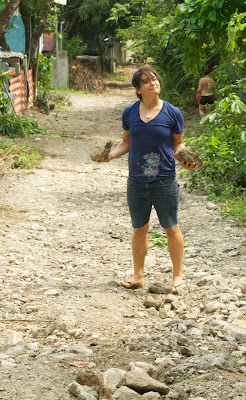 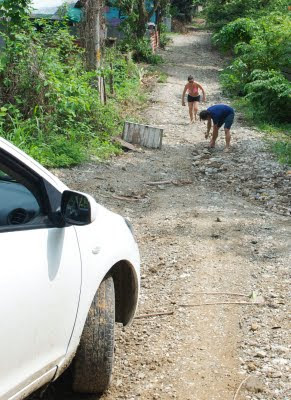 The road (at this point in it anyway) was challenging for the giant trenches in it mixed with giant rocks and a low little car. Our solution was just to re-arrange a bit. I mean, if you have a giant hole and you have a giant rock - they could become a solution together, no? We patched up the road and eked our way out - found a place to park at the bottom and taxied to the top. Somewhere in the midst of this kind of adventure, you kind of always ask yourself, 'is this worthwhile'??? the answer - undoubtedly was YES.

So - the castle...
It's on the top of a hill, looking out over the ocean and it just grabs your breath and steals it. You can listen to the ocean - play in a swimming pool (swim into a living room - which is just insane!!) and pretend like all that is not idyllic in the world, doesn't exist. Long-term, probably not a good fit for me, short-term - little bit of heaven. Here's new vocab lesson two: infinity pool. 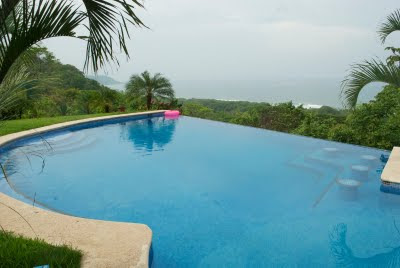 For those of you, who are like me - and this is a new or completely strange concept - it is designed to part of the pool just flows over the edge - and at the right angle looks just like the pool falls into the ocean. Really pretty and a little ridiculous.

We flew home, rather than the 7-9 hour bus adventure and again - I was in love with the ocean, again. So here are a couple shots from up in the air. It was great apart from a desperate need for a bathroom (which doesn't exist on tiny tiny planes), but that's a story for another time. 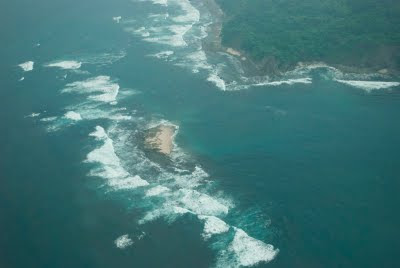 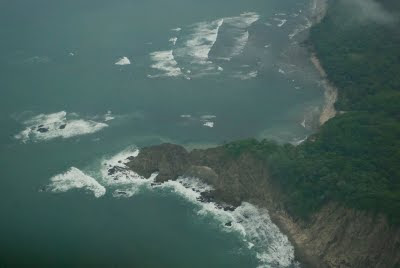 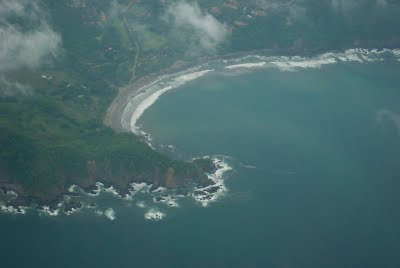 Costa Rica really is a rich coast. A great way to launch into the 'focus and write the thesis now, Diana' phase of this program.

I hope you're well.
peace to you,
diana