This past weekend, we went to the Deep Freeze Festival on 118Ave. Have you been? So much fun! My nephew was cleaning up on the ice during minor hockey week (two games, three goals! Go Josh! Woo!) so Lillian got an Aunty based date on her own. However, there were new people there, so the amazingness of that was perhaps over shone. Cheryl was there with her little dudes (she's more prompt blogger - so her pics are already up), as well as our friends Hannah and Jon. We had a blast. 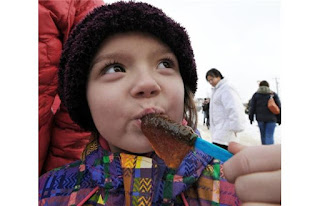 As we arrived we encountered the cabane à sucre. We got our popsicle sticks and hopped into line. I had my camera there, but was too busy helping roll. However, good fortune ensued and the guy pouring the syrup said, "photo op" and the Edmonton Journal man appeared. There are loads of other pictures up too on the Edmonton Journal website... but this one's my favourite.

Following this we moved onto checking out some ice sculptures that were still in process and trying to track down Cheryl and company before heading off to find the activities.

We found the curling rink!
There were lots of fun things to go and do - and lots of people doing them. Thankfully, everything was moving quite smoothly and so lines just didn't seem to be an issue.

The theme this year was "the Wild West" which is a fun thing to watch in a winter festival. Snowy wagon anyone?

We eventually went inside to listen to some music, thaw out (although I think that was an older person, not a small person desire), and have some hot chocolate and popcorn.

After the snack our smallest friends, and Cheryl and to head home. Nap time is not something to be messed with. On our way back out Hannah and Jon decided to test out the ice-gun with their hot chocolate. Yep - that's baileys coming through the barrel. I can't think of any other way that a gun is a good idea.

On our way home we stopped to check out the entries for the warming stations. So many of them were so neat. I liked this one with doors and lanterns. 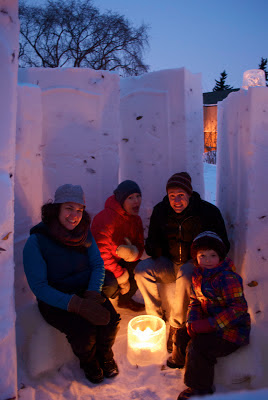 It's an awesome little festival - actually all the things put on by Arts on the Ave are. If you didn't go this year, you should next year. It's delightful.

I hope that your new year has begun delighting in the people and spaces around you.
Peace to you!