Tomorrow is the "North American Festival" at Upeace. If I were to ask you what are the cultural aspects of North America you would like to celebrate with other students from around the world - what would you pick? Apparently the tradition here is 'thanksgiving'. Here is my caution - if anyone ever suggests you want to do this...

ANY recipe made for 300 people is crazy. DO NOT ATTEMPT while also enrolled in something else super busy - like grad school... :)

Today I learned (or at least confirmed) that I NEVER want to be a caterer. I was in charge of coordinating pie - for 300! My pie-bee partners were amazing - and we cranked out 40 pies in 8 hours... Not bad! I am super proud of my team of people who pretty well had never made pie before! We did decide that if we were to open a bakery... we would name it How We Roll. We're ready, just in case the insanity is permanent. :) My eternal gratitude for their help! Tomorrow we will have 20 pumpkin - and 20 apple pies, joyfully made to end off our feast. Tonight however - I feel like I could go without pie for quite some time. :) 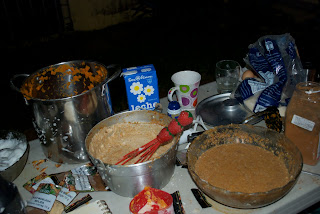 Anyway - are you feeling inspired? Do you want to make some pie? I love how recipes get passed with people's names on them - so I won't change them... Here's what we did (with a few small modifications for what is available in Costa Rica):

Most delicious pie crust - (makes 5 pies) (aka Lorraine Vermeulen's pastry)
1 lb shorting
1 tsp salt
5 cups flour
1 egg
2 Tbsp vinegaar
Water to fill to 1 cup
Cut lard into flour and salt.
Slightly beat egg in a measuring cup.
Add the vinegar. then water to filll to 1 cup level.
This pastry is very moist so lots of flour needed for rolling. Rolls better when it is cold (impossible here - we just used extra flour... and some patience, although when warm - old wine bottles are a great substitute for a rolling pin - they glide!).
Clara's apple filling - makes 3 pies
15 c. apple chunks (peeled and diced)
2 cups sugar - add more if people like it sweeter
2 tsp cinnamon (I put in more... but I love cinnamon)
4 Tbsp. flour
325F for 50 minutes (or until everything is a lovely light brown and perfectly bubbly)

Pumpkin Filling
1 cup cooked pumpkin (you can substitute yellow squash, sweet potato or carrots. We didn't have pumpkin -so carrot it was! shhhh - don't tell).
1/2 cup sugar
1 t. cinnamon
1/4 t. each of ginger, nutmeg and cloves
1 t. vanilla
1 cup milk or cream
2 egg yolks.
Mix; then beat the egg whites until still and fold into mixture.

Pour into unbaked shells and bake at 425 for 10 minutes.
Reduce heat to 375 and bake 30 minutes or until filling is set.

Anyway - time for bed.
Peace to you!
diana 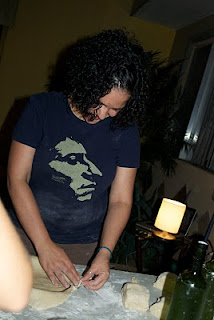